‘The influence of the millenary culture of Tiahuanacu (La Paz - Bolivia) is the principle for the realisation of my works. Based on myths and legends of the Andean theogony Aymara, Quechua and other pre-Columbian paintings with a contemporary abstract and figurative artistic expression based on the range of colours of the Andean region.’ 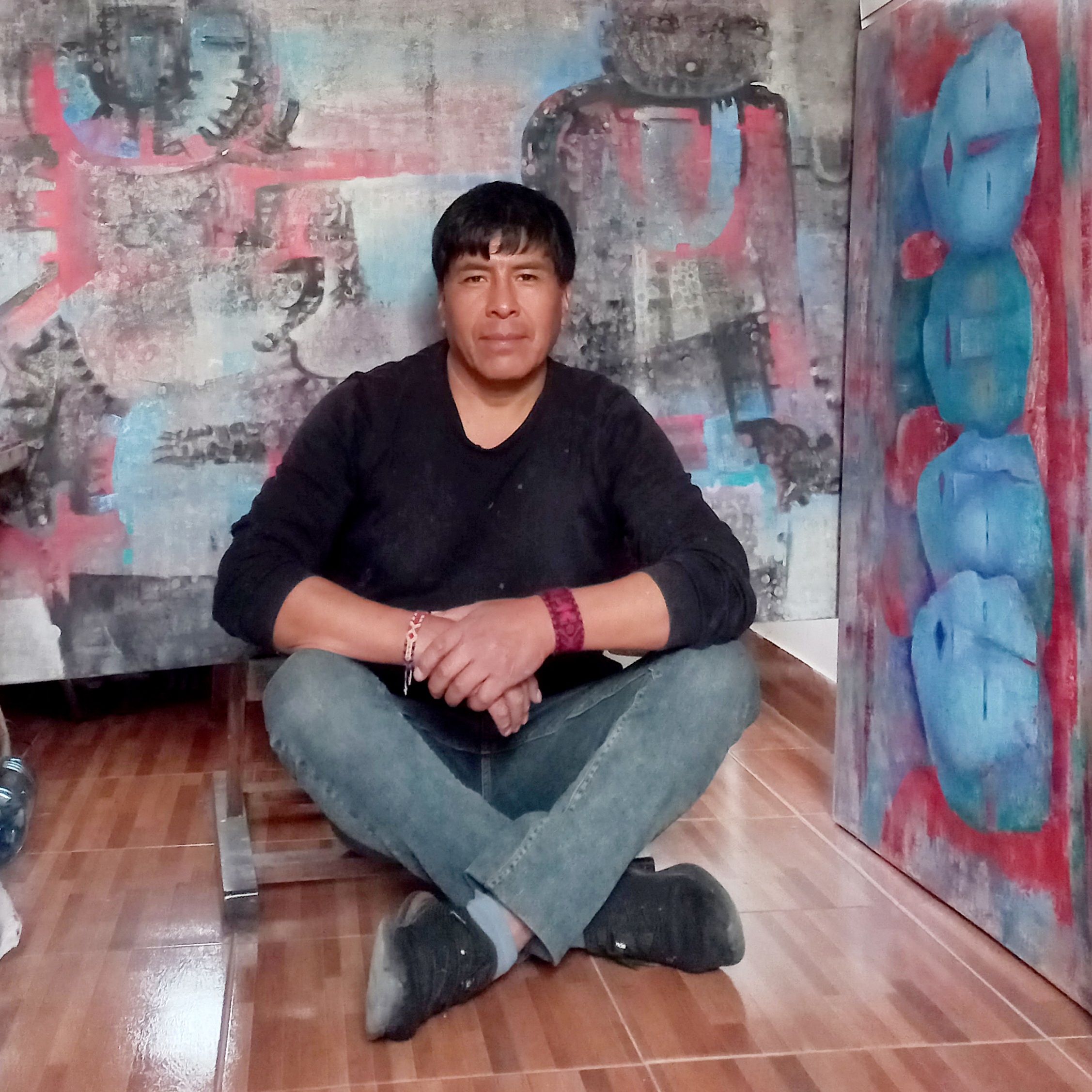 A glance at my Aymara culture - Tiwanaku
It is not the same to talk about a European painter as a South American one. In the case of the latter, the artist merges with the disorder of Creole life, his emotions, sorrows, doubts, disconcerts of life, linked to the social torrent, so that, far from being the master of his art, he is rather the servant of his people. This is the case of Jhonny Blanco, a man of thought and action dedicated to represent the new Bolivian generations for a decorum and reality arising from Andean thought. It is a noble vocation of the artist to reveal that hidden world that springs from the bottom of the earth, it is a biological imperative, because every culture originates in the earth (``Pachamama``) and in the mythical ancestral distances. Jhonny Blanco was born in La Paz, Bolivia, of Aymara parents. To rediscover his culture in ``Ecos de Tiwanaku`` is to continue the art of the Aymara culture. Symbols, Andean gods, faces, cave characters, essence of the Theogony and Andean cosmovision, where each word has a hidden meaning of truth and beauty. The brush, spatula and pigments are used to create and shape his works, which the spectator will appreciate. The palette of Andean colours in its different shades takes us to the Bolivian Aymara plateau and the pre-Columbian cultures. Jhonny Blanco is a painter and researcher, a dedicated student of himself, attentive to reflect the Andean cultural philosophy of his country, the study of the millenary culture of Tiwanaku (La Paz - Bolivia) prior to that of the Incas, observer of the ancestral customs and traditions of the native Aymara, main sources of his inspiration. The only representative of his works and projects, in La Paz he participated in collective exhibitions in art spaces in his city, later exhibiting his work in cultural spaces in Buenos Aires when he emigrated to Argentina in 1994. Since 2006 he has been on the roster of painters at the Museo de la Ciudad de Buenos Aires. His work in different techniques - oil, acrylic, watercolour, ink, sculpture, among others - have made his works to be chosen by citizens of different countries: Uruguay, Paraguay, Venezuela, Colombia, Brazil, Mexico, Costa Rica, USA, Canada, France, Spain, Belgium, Portugal, Holland, Norway, Russia, Israel, India, Japan, Korea. BA in Painting UNA / Universidad Nacional de las Artes, Buenos Aires.